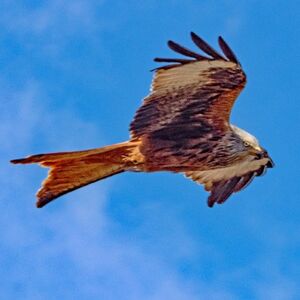 For a few days I had been toying with the idea of a visit to Watlington Hill to see if there were any Red Kites but there had not been a morning with a clear sky. This changed on the 15th April and I duly set off down the M40 towards Watlington. After a near miss with an articulated lorry which seemed to require 2 lanes of the road I duly arrived at the National Trust car park at about 9am; it was almost deserted!
As I walked through the trees and came out into the open there appeared to be Red Kites everywhere; I messaged a friend who had been unable to join me to tell her that "the sky is full of Red Kites". She was not impressed.
Having learned from previous visits that it is pointless taking shots when the bird is too far away I restricted the number of shots that I took and came away with a few decent images, they are Watlington Red Kites Nos. 38 to 42 inclusive in the Red Kite Gallery. I did have quite a close encounter with one of the birds that insisted on circling close overhead but, given that I didn't really have any other option, I kept on shooting!
All in all a successful trip rounded off by a cup of Starbucks coffee at Oxford Services where unfortunately there is not a Greggs!
Next
Previous