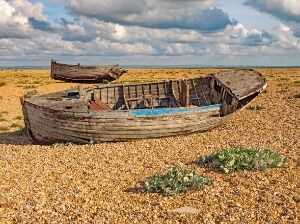 The south east coast of England is not an area that I am particularly familiar with so I've started to rectify that by spending a few days there.
I bought the Rough Guide to Kent, Sussex and Surrey and looked through my collection of locations published in Outdoor Photography and drew up a draft plan which would take me from Devil's Dyke in the west to Dungeness in the east. My base was to be the Premier Inn at Polegate a few miles north of Eastbourne.
Setting off bright and early my first stop was at Pease Pottage services where I was forced to have a Greggs coffee and sausage bap; at £2.20 why wouldn't you?
I then made my way to Devil's Dyke where I parked up courtesy of the National Trust (of which I am a member). I was expecting to take some landscape images but was greeted by a large group of hang-gliders and paragliders (I think!). This made for some interesting images but unfortunately the wind was so strong it was difficult to keep the camera still (and, apparently, difficult to land your paraglider according to one participant!) There is one image in the Kent & East Sussex Gallery, quality is questionable!
Next stop was Lewes where I parked up and had a stroll around the town finally making my way to Harvey's Brewery Shop for some essential supplies. I also decided to return here on my way home as I'm allergic to the sound of bottles rattling round in the boot of the car! There are several images in the Kent & East Sussex Gallery.
Next stop was a village called Alfriston which, according to the guidebooks, is photogenic. I didn't find it particularly so but I did spot an egret on the Cuckmere River on the edge of the village which is in the Kent & East Sussex Gallery. I also spotted a V registration (c1980) working Bedford TK which grabbed my attention as I am interested in old (1960's - 1980's) lorries.
Next stop was the National Trust at Birling Gap and the Seven Sisters. I initially walked down onto the pebble beach and made my way (I thought) towards the Beachy Head Lighthouse. I went about 500 yards and with no sign of the lighthouse returned to the car park and set off towards the top of the cliff and after something like a third of a mile the lighthouse came into view (at least I had been walking the right way along the beach!). I took several images and set off back towards the car park. Unfortunately I strayed the wrong side of a fence (to the inland side, surprise, surprise) which added about 200 yards to my journey but, alas, this was enough for me to get soaked as some fairly heavy rain came down. Given that the rain looked to have set in for the rest of the day I decided to head to the Premier Inn via Eastbourne sea front. Road works and diversions did not make finding the Premier Inn straightforward but when I eventually got there I was pleased to see a Co-Op Fuel Station & Convenience Store, A Whitbread Inn and a McDonalds on the site; that was probably everything I needed. After a Mac & Cheese Burger and Cadbury's ice-cream sundae (plus a couple of pints of Doom Bar) in the Treacle Mine inn I was looking forward to the next day.
I started the day with a Premier Inn breakfast which had to be table service rather than buffet given the Covid 19 crisis. It was ok but I prefer buffets; will we ever see them again? I had originally intended to go to Hastings and then onto Dungeness but I had heard that Dungeness was fascinating so I decided to go there first and work my way back to Hastings. The journey took longer than I thought but it was worth it; this could be called a landscape photographer's paradise. I was fortunate that there were some lovely clouds in the sky and the sun came and went. There are several images in the Kent & East Sussex Gallery and this was my favourite part of the tour. I had a quick coffee in the Britannia Inn (too much driving to be done to risk a pint). Instead of heading straight back to Hastings I decided to go a bit further round the coast and duly arrived by the side of the beach at Lydd-on-Sea. This was fortuitous as there were several kite-surfers just off the beach and also an interesting derelict boat on the beach. There are images of both in the Kent & East Sussex Gallery.
Next stop was Hastings where I located the local Greggs for lunch and took some images of some of the "active" fishing boats on the beach. Two boats appear in the Kent & East Sussex Gallery. From here I decided to return to Beachy Head as the weather was much improved on the previous day and I was able to get some better images.
Day three started with a McDonald's breakfast (my first since the lockdown in March, McDonald's loss being Gregg's gain) and I the set off for home via Lewes and a return visit to the Harvey's Brewery Shop. The maze of one way streets and dead-ends in Lewes were more than a match for my sat-nav but eventually, with a bit of local guidance, I was in the car park right next to the brewery. I decided to pay for 2 hours of parking and have another walk around Lewes; it is a very interesting place. Having taken several more images and stocked up with a variety of Harvey's ales I set off for home; a very successful few days.
Next
Previous