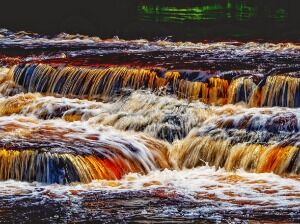 Day 1. I typically visit Yorkshire at least once a year, often going to the same areas. This year I set of on the 28th of July, not long after the coronavirus lockdown had been eased. First stop was Malham. It would normally have been McDonalds but I gave this a miss as it was only drive through. I parked in the National Park car park and set off for Janet's Foss armed with my normal Olympus kit and my Panasonic compact; you couldn't say that i was travelling light!. The National Park Centre was still closed due to the coronavirus. The weather wasn't brilliant and after about 1/3rd of a mile I had to don my waterproof trousers. I stopped off at Janet's Foss and took a few images and then moved on towards Gordale Scar. I set up my tripod and took a few images but as I was about to set off back towards Malham the wind got up and rain came down heavily so I found a bit of shelter and waited until it blew over; about 5 minutes! I set off towards the top of Malham Cove, I know the route, this was the third time I'd walked it. The tea van had arrived in the lay-by when I got back to the road but there was already a long (socially distanced) queue so I gave it a miss. At this point I had a decision to make; take the normal route to the top of the cove or return to Malham by road, This wouldn't normally be a consideration but given the recent rain I knew that the limestone pavement would be extremely slippery but I decided I'd come too far to miss the top of the cove. As I reached the edge of the limestone pavement I decided to get my Olympus camera out. This proved to be slightly costly as I managed to lose the lens cap which I thought I had put in my pocket but had actually slipped it into the gap between my waterproof trousers and my normal trousers from where it must have fallen to the ground never to be seen by me again! I was right that the pavement was slippery and this was made worse by a short shower but I eventually made it across to the steps and from there to the foot of the cove; I wouldn't do it again in similar conditions!
My plan bad been to go from here to Bolton Abbey but it was entry by advance booking only so I gave it a miss and headed towards Settle to try and find Scaleber Force; not as straightforward as you might think but I did eventually find it but the ascent to the foot of the falls was too treacherous to undertake given the amount of rain that we'd had so I set sail for Harrogate, checked into the Travelodge, had a couple of pints in the Winter Gardens and fish and chips at Gravelley's; not a bad day!

Day 2. My plan was to travel along Swaledale but I also wanted to visit the falls on the Swale in Richmond as I had not not been there before. I knew that there was 2 hours of free parking in the Market Place so I headed there; it was actually disc parking but I quickly obtained a disc from W H Smith's and set off for the river. I crossed the bridge over the river and descended to the river bank. After walking downstream for about 400 yards it became obvious that I was going in the wrong direction so I retraced my steps, re-crossed the bridge and headed upstream. I had a treat in store; the falls are spectacular with lots of colour in the water (I have been told this comes from the peat or possibly the rocks, either way it was spectacular). I took numerous images on both cameras and my phone and I later edited some of the Lumix images in Snapseed and you can see them in my Yorkshire Gallery. I then made the steep climb back to the Market Place. Given the reduced capacity in pubs and cafes due the coronavirus I planned to get some lunch to take with me; I was armed with my plug in cool box in the boot of the car. Heading for Greggs I noticed The Proper Pie Shop; it was a "no brainer" and I was soon the proud owner of 2 "proper pies" which were to be my lunch and dinner and were excellent!
I then set off along Swaledale. Some of the villages were very busy but it didn't impact me much as I headed for Keld where I normally park in the farmyard and walk to East Gill Force. On the way I was able to stop at the side of the road and grab some quick images of the famous Swaledale barns view. The farmyard was quite busy but I found a space and paid my fee (can't remember if it was £1 or £2). I set off for the waterfall and again took images on both cameras and my phone, one of the tripod mounted longer exposures is in my Yorkshire Gallery along with some Snapseed edits of the Swaledale barns.
Next stop, as always, was Wain Wath Force. There wasn't a lot of water coming over the falls but I took some images and a couple are again in my Yorkshire Gallery.
There is only one place to go from here, the world famous Tan Hill Inn (see link to their website on my links page). Unfortunately it was "rammed" and there was a queue to get in due to the coronavirus track and trace registrations so I gave this a miss and drove back to Reeth over the moors. I did take an image of a lone ewe which again is in the Yorkshire Gallery. There was a complete absence of grouse; it may have been too early in the year as I saw loads here in October last year but I have also read that there are far fewer grouse around this year. From here it was back to Harrogate for another couple of pints in the Winter Gardens and a "proper pie" in my room for dinner.
Although I was booked into the Travelodge for another day the weather forecast was bad so I checked out a day early. The kind lady on Reception organised a refund which I wasn't expecting.
All in all quite a good trip.
Next
Previous