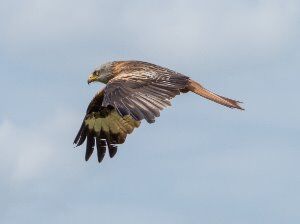 Encouraged by my relative success when photographing red kites which I came across by chance when driving I thought I would try a more structured approach and took a trip to the National Trust's Watlington Hill near Christmas Common in the Chilterns, renowned red kite territory.
After one false start when my satnav directed me to a dead end I arrived at the National Trust car park.
There were signs warning against feeding the red kites as apparently some of the birds were losing their natural wariness of humans and "making a nuisance of themselves" - given that I have a phobia of feathers and birds this was not something that I particularly wanted to hear!
After a walk of about 200 yards I emerged into the open grassland and within a few minutes the first red kites appeared. Over the course of about an hour and a half I took about 150 images but deleted many of them as I went as I have a tendency to press the shutter release even when I know they are too far away.
A couple enjoying a picnic about 20 yards away from me had a bit of a shock when a couple of birds swooped to within about 25 feet of them; with my lens set at 600mm I couldn't actually fit them in the frame!!
When I eventually edited the images I had about 15 of acceptable quality which I have posted in the Red Kite gallery. A couple of these were just about acceptable to print at A4 size. The learning point for me is to use a slightly smaller aperture to give extra depth of field and possibly increase the ISO slightly. You live and learn!!
Next
Previous