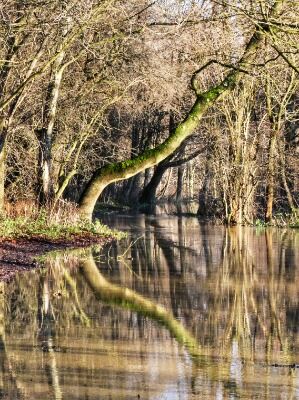 On Sunday 20th December I received a message via the NHS Covid App telling me that I must self-isolate until midnight on 23rd December. I duly did so and used the time to watch all 8 Harry Potter films, something I had been meaning to do for almost 3 years!
When I emerged on Christmas Eve I was met with a very wet Banbury; I think it had rained for most of my self-isolation. Heading into Spiceball Park my normal route was impassable as the River Cherwell had burst its banks and the footpath was under water. Taking an alternative route I was confronted with another flooded path, pictured in the image attached to this blog.
Heading into town I found that the Mill was flooded and the water was running across the Mill car park into the canal.
I have included some images in both the Banbury Local Area Miscellaneous and Spiceball Park Galleries.
Postscript: an early Christmas Morning walk revealed that most of the floodwaters had receded, quite amazing!
Next
Previous