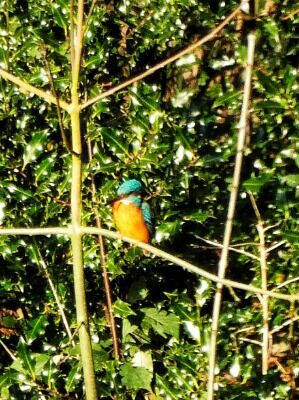 On my morning walk around the reservoir and Country Park I had a brief chat with a local ornithologist and photographer who goes under the pseudonym of DaFu (see the Banbury Birds page on Facebook) and managed to prize out of him the best location at Farnborough to see the kingfishers. Armed with this information I set off just after midday for Farnborough as he had indicated on the Banbury Birds Facebook page that the kingfishers tended to show between 12:30 and 13:30. Almost as an afterthought I picked up my binoculars as I walked out. I had spent around 45 minutes walking along the banks of the lake and peering through my binoculars, primarily in the area to which he had directed me without any joy when suddenly...bingo....I spotted something turquoise quite high up in a tree on the far side of the lake. I took a few images but they were of no use as the bird had it's back to me and was also partially hidden behind a mass of small branches. After a short time it flew off and, although I saw the general direction in which it had headed, I couldn't pinpoint it. All was not lost; I had seen kingfisher No.11 so I was happy! Undeterred I continued to scan the far bank of the lake with the binoculars to see if I could spot it again and, after about 5 minutes, I struck lucky and spotted it facing me, this time on a branch closer to the water. I took several images and then it moved again, but only a few feet and I was easily able to locate it and this time I gorged on the sight in front of me and took about 30 images. As the bird was on the opposite side of the lake it was about 35 yards away and therefore I needed to use the Panasonic DC-TZ90 at 1400mm which is a digital zoom. Even at 1400mm the bird is not even close to filling the frame so the attached image has been edited in Snapseed and cropped quite significantly, All in all a good day!
Postscript: Kingfisher No.12 was spotted on the banks of the River Cherwell where it passes under Heneff Way in Banbury on 6th January 2021; unfortunately it didn't linger long enough for me to photograph it.
Next
Previous