KINGFISHER No. 9 AND A BUZZARD! 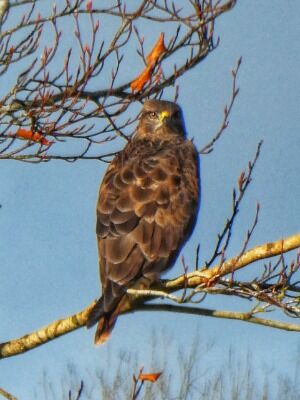 As it was a bright day I decided to have a ride over to Farnborough to see if the sun had brought out any kingfishers. Shortly after turning off the A423 towards Farnborough I noticed a large bird sat in a tree, but wasn't able to stop. I thought it was worth turning round and having another look but, approaching from the opposite direction, I didn't see anything. Thinking that it must have flown off I swung around in the A423 and headed back towards Farnborough...and then I spotted it again. This time I was able to pull up on the roadside and took around 30 images on my Panasonic DC-TZ90 at 1400mm. This meant that quality wasn't perfect but it was ok for me! Not being an ornithologist I didn't know what I had photographed but after posting the image on Facebook and consulting Google it was generally agreed that it was a buzzard. To round off the day kingfisher number 9 put in a fleeting appearance at Farnborough but unfortunately did not present a photo opportunity.
Postscript: kingfisher number 10 was spotted on the Oxford Canal close to Bridge 161A on 13th November and although it did perch on a branch for a few seconds it was gone before I could even think about taking a photo.
Next
Previous