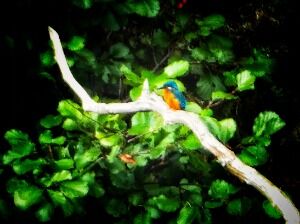 For slightly in excess of 63 years I had never seen a kingfisher, but that changed on 14th October 2019 when I was walking along the banks of the River Wharfe at Bolton Abbey and someone pointed out that there was a kingfisher in a bush overlooking the river. I took some images with my 600mm zoom but the bird was still very small in the frame. I cropped it as tight as I dare; it is Kingfisher 1 in the Kingfisher Gallery.
My second sighting was on the 2nd March 2020 at Sourlands Pool, Farnborough. Again the bird was pointed out to me, it was at the far side of the lake, probably 30 yards away I
took some images at 600mm and the bird was even smaller in the frame but again I cropped it and it is Kingfisher 2 in the Kingfisher Gallery.
Sightings 3 & 4 took place one after another on 4th September 2020 as I saw 2 flashes of turquoise as a pair of kingfishers flew down the River Cherwell at Banbury.
Sighting number 5 took place on 19th September 2020 and was a bit fortuitous. I saw a small bird in the far distance on the side of the Oxford Canal and managed to get a couple of images at 1440mm with a digital zoom. It wasn't until I viewed the image on the back of the camera that I realised it was a kingfisher. Needless to say I cropped the image as tightly as I could but the quality leaves a bit to be desired (to say the least)! It is Kingfisher 5 in the Kingfisher Gallery.
This brings me on to sighting number 6 which was at Sourlands Pool, Farnborough on 28th September 2020. I was thinking of leaving but had a quick walk towards the village end of the lake when I saw a kingfisher flying along the lake away from me. I managed to establish roughly where it landed using a "white" branch as my marker. Making my way to a point roughly opposite where I thought the bird had landed I focused on the branch, which was about 30 yards away across the lake, and bingo, I immediately focused on the kingfisher. I managed to take 5 images before it flew off. It is Kingfisher 6 in the Kingfisher Gallery.
Postscript: Sighting number 7 took place on 16th October 2020 on the River Cherwell at Banbury and again was a fleeting flash of turquoise as the bird flew up river.
Postscript 2: Sighting number 8 took place on 30th October 2020 on the Oxford Canal at Banbury, unfortunately another fleeting flash of turquoise and although I loitered for a while I was unable to locate where the bird had landed.
Next
Previous